So when is my collection of medical antiques “complete?”

The experienced collector with a large collection might answer: when you have a Heine Osteototome. This may be considered the Holy Graal of medical antiques as only 8 are known to exist per my mentor, Dr. Doug Arbittier.

As you can see from the articles below, the Heine osteotome was recognized as a mechanical chainsaw that was well before its time, arriving on the scene in the 1830s when all doctors where using bone saws and non-mechanized saws. They were extremely expensive, roughly $300 USD each vs $5 USD for a Standard Capital Saw in Tiemann’s catalog. Most doctors could not afford them, did not know how to use them, and they were not bought, hence their rarity,

Well, I finally got my hands on an unmarked Heine Osteome with Totrtosise Shell Handle in the original box, It needed some museum quality restoration work and the images I took this AM with my smart phone on a wooden desk chair but I was excited…the osteotome is a foot long, probably smaller.

To be honest, given the cost, I cannot say I feel as though my cup runneth over with joy–but it is nice to have! 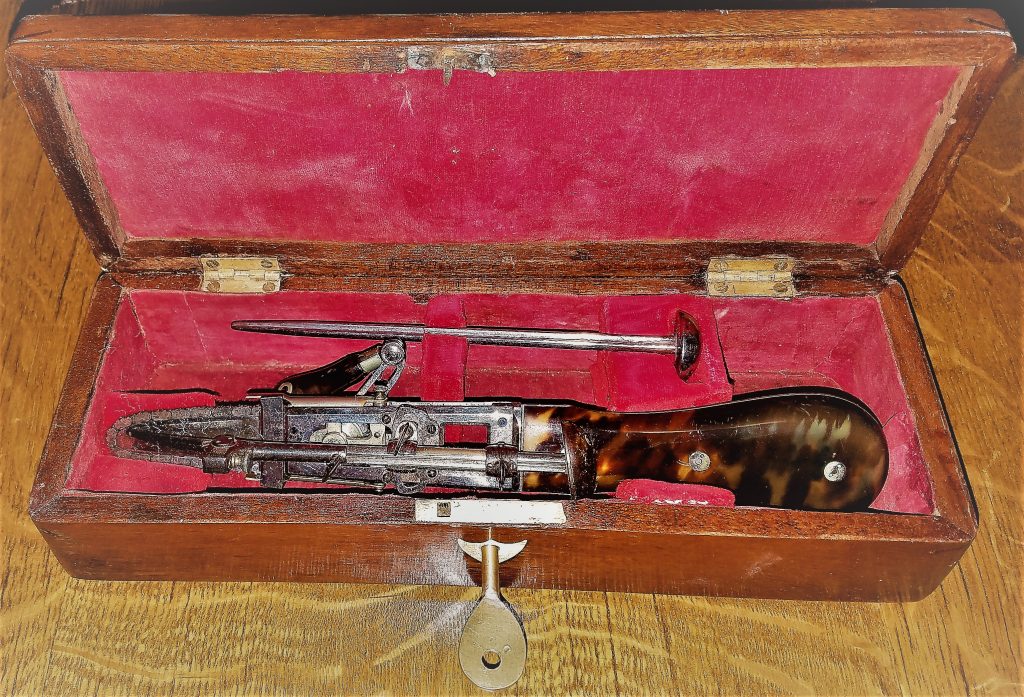 Below are a few links which may be of value to you:

Below is an interesting article about the Heine Osteotome from:

When Bernhard Heine (1800–1846) was just 10-years-old, his parents sent him to his uncle’s workshop in Würzburg, Germany to begin an apprenticeship as an orthopaedic technician. He was in good hands. His uncle, Johann G. Heine, is widely considered the founder of orthopaedics in Germany [3, 4, 9], having opened the Caroline Institute (Karolinen-Institut, named after the Bavarian Queen Caroline), the first orthopaedic institution in Germany, in 1816. Johann’s renowned workshop in Würzburg manufactured artificial limbs, wheelchairs, and other orthopaedic devices.

Like his uncle Johann, Bernhard Heine had a natural talent for crafting orthopaedic devices, but lacked a formal medical education. Instead, Bernhard Heine attended anatomical lectures and surgical demonstrations. At the age of 20, he traveled the world to further his medical education [9]. Upon his return, Heine practiced medicine and surgery, specializing in orthopaedic surgery. He designed and built many of his own instruments and appliances, but none as important or widely renowned as the chain osteotome, which he developed in 1830.

Heine’s design, similar to the modern chainsaw, cut through bone quickly, without the patient enduring blows from a hammer and chisel or jarring from a regular amputation saw—an important advancement at a time when anesthesia was rarely employed. Surgeons could perform resections and even craniotomies without leaving bone splinters or damaging surrounding tissue [5, 6]. The example held by the National Museum of Health and Medicine, however, illustrates the complexity of the instrument (Fig. 1). Several guards on the saw could be configured to minimize the cutting surface and prevent soft-tissue damage. A rod with a screw tip served as a pivot for craniotomies. The saw required considerable skill to use, and few could wield it as well as Heine.

Still, the invention brought great fame to Heine. In 1835, he was awarded the prestigious Monthyon Prize by the Académie Française. He then spent 6 months in Russia demonstrating the instrument as a guest of the Czar [4].

Osteotomes were manufactured in Germany by Bernard Heine and in France by Charriere et Fils. George Tiemann and Co. of New York, eager to demonstrate that they were a world-class producer of surgical instruments, manufactured this chain osteotome in the United States with a tortoise shell handle and gold plated parts [8]. It was displayed at the 1872 Exposition universelle de Lyon to demonstrate virtuosity in surgical instrument fabrication, and was awarded both the silver and bronze medal, which they proudly included on the title page of subsequent catalogs. The instrument was donated to the Army Medical Museum after the exposition, only to be borrowed for the 1876 Centennial Exposition [1, 2]. Tiemann subsequently marketed the osteotome for USD 300 in the 1872 catalog compared with USD 5 for a standard capital saw or USD 191 for a Buck’s general operating set [7].

Perhaps the importance of the chain osteotome was more symbolic than practical; it demonstrated that orthopaedic surgery was not only a medical specialty, but one that merited prestige.